Weber is on course for success. According to its own statements, the fast-growing company is the international leader for industrial high-performance slicing of sausages, ham and cheese. For further reduction of the unit costs and the lack of skilled workers at the Neubrandenburg location in Mecklenburg Western Pomerania, the company has recently started to automate production from batch size one and to produce almost unmanned. Workpiece clamping plays an important role in success.

Dirk Kleinwächter, managing director of Weber Maschinenbau GmbH at the Neubrandenburg plant is convinced that he has chosen the right path: “We are one of the first companies in the region to manufacture automatically from batch size one and I am sure that this will be the trend in the industry in the coming years.”

The company produces high-performance slicers, derinding and ice cream machines as well as circular and sickle blades on an area of 18,000 square metres. The machines are part of the comprehensive product portfolio for the food industry, which ranges from individual devices to complete slicing-portioning weighing lines with a length of up to 30 metres.

A large number of different workpieces are manufactured, because in addition to complete machines, the Neubrandenburg site also supplies sheet metal and machined parts to other production sites in the group of companies. For quality reasons, among others, the vertical range of manufacture is extremely high at 85 per cent; even screws and nuts are manufactured on site. Around 95 per cent of the workpieces are machined wet with cooling lubricant.

From the very beginning, managing director Kleinwächter attached great importance to the automation project: “The further reduction of our unit costs can only be reached with an even more effective production. Thanks to continuous investment in automation, we are able to achieve this.”

Frank Brunner, head of the machining department, describes the concrete objectives of the project: “We wanted to reduce unit costs, increase spindle running times, speed up set-up and produce even batch sizes from one to five economically.”

Carsten Toboldt, foreman of machining in Neubrandenburg, played a decisive role in the operative implementation. The automation project was launched in 2014 with the analysis of approximately 14,000 live components in the plant. It revealed that in Neubrandenburg, around 80 per cent of all components are 75 mm or 125 mm wide and suitable for automated production.

In the middle of 2015, we can be proud of what we have achieved. The spindle running times of the machines have been increased from the previous 50 per cent to 85 per cent, whereby, according to Toboldt, “there are still a few percentage points to be gained”. With an annual machine running time of 300,000 minutes, the spindles now mill for 105,000 minutes longer than before, a success that is mainly due to the fact that set-up has been moved from the machine to an external set-up station. During the week, production is automated in the early and late shifts, while at night and on weekends, production runs unmanned - even for the smallest batch sizes.

At the external set-up station, the workpieces are clamped with the machine vices and prepared for machining. Toboldt explains the decision for only one type of vice: “We wanted a universally applicable model. That's why we have the same mounting grid on all pallets for mounting the vices.” The pattern of fixing and mounting holes, internally called “Weber grid”, is also used in the factory at the company headquarters in Breidenbach, where HILMA machine vices of the types KNC and DS 125 are in use.

The grid in the lower part of the vice ensures an optimum frictional connection to the pallet. Furthermore, there is no need for disturbing clamping claws, so that it is possible to mount the machine vices closer together.

As a standard two, in exceptional cases, three vices can be mounted flexibly and with different spacing dimensions on the 68 large pallets measuring 500 x 500 mm. The 30 smaller pallets, half the size of the other pallets, provide space for one machine vice. They are mainly used for 5-sided machining. Zero-point clamping systems are used to fix and position them on the machine table so that they can be exchanged in seconds. For the smaller versions, a pre-pallet is used in between. The height required for 5-sided machining is achieved so that the spindle can reach the workpiece from all sides without collision.

One vice for 80 per cent of all components

The mechanical-hydraulic HILMA KNC 125 machine vice used in Neubrandenburg covers four-fifths of the components manufactured in the factory. The vice offers a high degree of flexibility because the jaw openings can be adapted quickly and the jaws can be changed rapidly. Furthermore, with only one basic type, the jaw inserts and jaws can be used on all vices.

The KNC is used in two versions: As a standard version with a 440 mm base length and in a “Weber version” shortened by 120 mm. The shortened version is mainly used for 5-sided machining in narrow machine rooms. Carsten Tobold explains: “For 80 per cent of all components, we succeed in producing them in one clamping.”

Besides shortening the machine vice, the clamping technology specialist has made further customer-specific adaptations for Weber. The contact persons for the Neubrandenburger company were Christoph Neuhaus, the sales department for workholding systems at the ROEMHELD location in Hilchenbach, and Enrico Weigel, technical consultant of the regional sales partner Adolf Neuendorf GmbH. 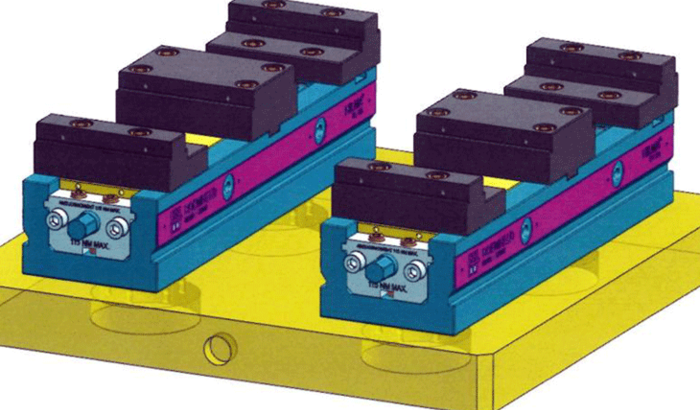 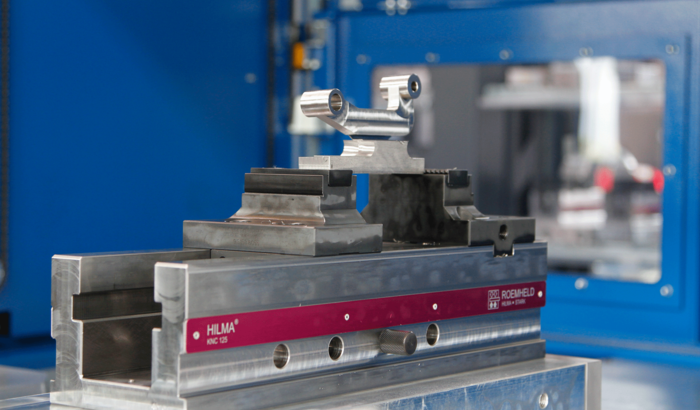 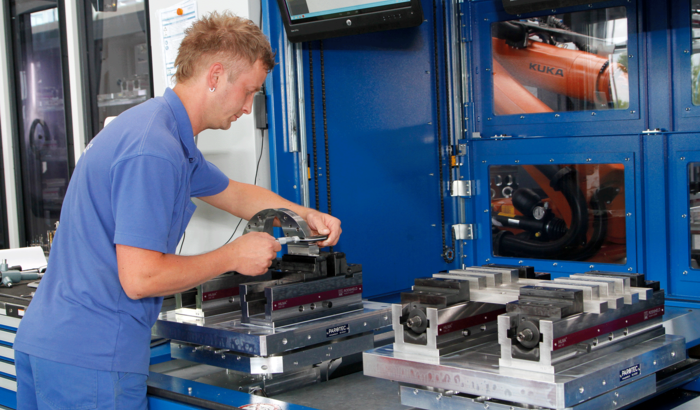 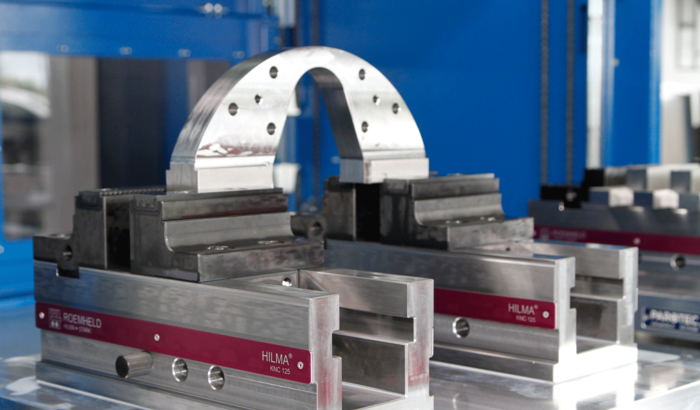 To clamp as many workpieces as possible with only one type of machine vices, the clamping range was extended, for example. By moving the fixed jaws of the shortened machine vices backwards, the clamping experts could also eliminate interfering edges so that the tools can work collision-free during 5-sided machining. Also, a secured socket pin ensures that the slides of the vices remain in position even in the unclamped mode when the machine is running at high rapid speeds.

“We also have developed customer-specific clamping jaws according to Weber’s specifications, because most components are clamped with extra-high clamping jaws including jaw inserts,” explains Neuhaus. For this purpose, the engineers of the clamping technology specialist examined the customer’s components and collision considerations as well as the mounting options on the pallet.

The quickly interchangeable jaw inserts are available as standard with a grip structure, with hard-metal or TUC coating. They are used to increase the retention forces when required, to compensate non-parallel clamping surfaces or when powerful clamping is required for narrow clamping edges. If necessary, they can also be used to reduce the clamping edges of a workpiece.

Neuhaus und Weigel no longer had to convince the responsible persons at Weber of the quality of their machine vices. The company has used HILMA machine vices for almost 15 years. Also, the project managers tested the mechanical-hydraulic machine vice KNC 125 in an internal test run to determine its suitability for the automation project.

With success, as Carsten Toboldt reports: The KNC’s advantages are its high clamping force, its process safety, its high flexibility and its simple and reliable operation. Combined with the high quality and reliability, we have not found this with other suppliers.

The workpiece change is effortless: The workpiece is unclamped with a crank handle, and then the socket pin is pulled. If necessary, the slide can be adjusted manually to a different clamping range. Once the clamping range has been roughly preset and the slide is fixed using a socket pin, the crank handle is first used to approach the workpiece mechanically. Further cranking causes a switchover to the hydraulic high-pressure range, and then the clamping force builds up linearly to the maximum.

The KNC was also chosen because of the many years of good experience to which production manager Brunner refers: “We have been using HILMA machine vices for 14 years and have never had problems or a situation where a component could not be clamped. They are always accurate in position and reliable in clamping. I’m sure that we will work well with the clamping devices for the next 10 to 15 years.”

After completion of the planning, Weber ordered in November 2014 a total of 104 machine vices KNC in the customer-specific version and a basic set of clamping jaws. ROEMHELD delivered the first vices for running-in before the turn of the year and Weber received the remaining ones by the end of January. In the plants in Neubrandenburg and Breidenbach, holes were drilled on the pallets so that the vices can be quickly and safely fixed and positioned with an accuracy of 2 µm.

Application-related documentation provided by the manufacturer makes it easier for the responsible persons in the company to retrofit additional pallets with vices easily. To ensure that all clamping devices are always reliably ready for use, Weber has also concluded a service and maintenance agreement. According to this agreement, a ROEMHELD technician will check all clamping systems once a year and service them, if necessary.

Praise for cooperation in partnership
The cooperation was excellent and proceeded very quickly so that we were able to implement our ideas quickly.“
Carsten Toboldt, Project manager

All persons involved are highly satisfied with the progress of the automation project. Product manager Carsten Tobold: “The cooperation was excellent and proceeded very quickly so that we were able to implement our ideas quickly. After the first four months from February to mid-June, we already clamped 320 components with the machine vices in the automated production, which was very fast.” And also managing director Kleinwächter gladly recommends the clamping technology company to others: For such a project, you need partners like ROEMHELD, who have fully supported us at all times.

We are here for you.

Do you have questions about your customer account, enquiries or orders? Please feel free to contact us.

Take advantage of the free benefits of our login area:

Register for free
Login
Welcome back